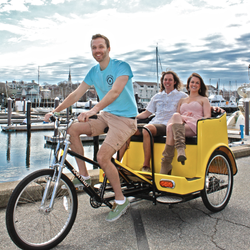 Not that we’re recommending it, but let’s say you suddenly to start your own bike taxi service.

Let’s further assume you’re serious about this undertaking, and you want to pedal your way to big bucks – the more, the merrier.

To accomplish that, which of the two options would you be more likely to pursue:

Pretty simple, right?  You’re going to pace yourself because you’ll work better, last longer, and be way more inclined to show up for work again tomorrow, rested and ready to go with the traffic flow.

Well, while no one ever accused an air conditioning system of being human, they’re much “happier” pacing themselves, too.  And a happier AC system is one that works more efficiently and lasts longer, both of which save you money.

Consider, if you will, a variable speed air conditioning system.  Unlike your current AC system – which runs at full tilt until the desired temperature is reached, then shuts itself off only to re-start once the temperature starts to rise – a variable speed system runs constantly.  But it’s not working at full tilt.  Rather, it’s pacing itself, transitioning constantly from lower to higher speeds as indoor conditions dictate.

Out of that come several important benefits:

Ready to upgrade to a new high efficiency air conditioning system?  Then contact Air Professionals today for a free in-home consultation and new system quote.  And be sure to ask us about a variable speed AC system.