Starting in October or so, many outside air conditioning units will be decked out in their winter wear. They’ll be covered in some fashion, perhaps have brick or two on top to keep the cover in place, and/or be tied around the middle so the wind can’t expose them from the bottom on up. 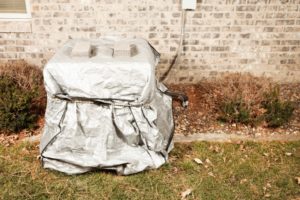 You’ll also be able to tell the difference between makeshift condenser unit covers and those specially made for the make and model of they’ve been designed to protect.

But never mind all that, because the real question is this: Is covering your condensing unit for the winter the right thing to do. No, not really.

In fact, you can do more harm than good by covering it up.  That’s because you would be creating a safe harbor for furry little critters looking for just such a warm, dry location for shelter from winter’s cold and precipitation. Once they get their paws and claws on your condensing unit, our four-legged “friends” are likely to gnaw on electrical wires and other working parts, creating repair problems one chomp at a time.

Furthermore, your outdoor condensing unit was designed to withstand the winter’s cold and the intrusion of snow and ice, which gives you one more good reason to leave it be.  Still, if you’re inclined to give it at least some protection, cover the top only. In that instance, you might place a tarp across the top and then hold that down with plywood, and maybe place a brick or two on top of that for added stability. Then at least you’ll keep debris from falling into the unit.

But as for blocking the intrusion of dirt, snow, and ice, it simply isn’t necessary. Anyone who tells you differently probably sells AC condensing unit covers, so take that advice for what it’s worth.