If you’re accustomed to using a ceiling fan only during the warm weather months, you’re getting only half the value it affords. This practical, energy efficient fixture not only can make you feel cooler in the summer but can make your home feel noticeably warmer come fall and winter. You expect at least that much, right? But what might surprise you is how much one or more ceiling fans can help reduce your energy costs.

Mounted in the center of a ceiling – ideally in rooms with 8-foot or higher ceilings – a ceiling fan adds warm or cool air without the need to adjust the thermostat. Read on to learn how to use your ceiling fans to their full potential all year long. 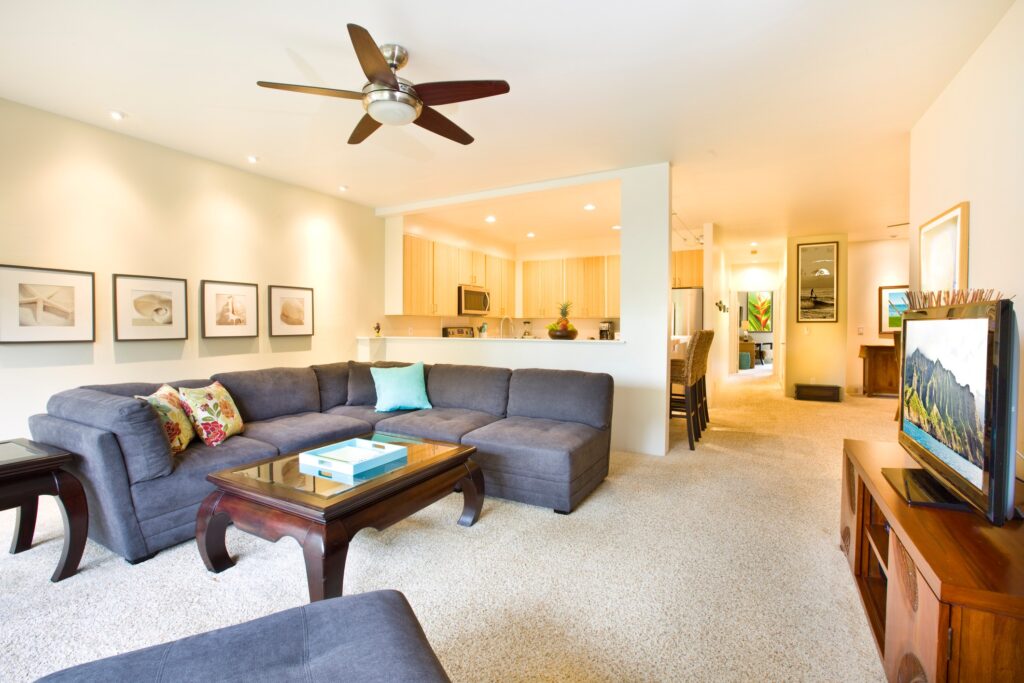 During the warmer months, the blades should turn counterclockwise to produce a current that moves down and out, sending air back up along walls. The counterclockwise spin redistributes air throughout the room, moving cool air down where you can feel it. The temperature in the room doesn’t change; the air just feels cooler on your skin. As such, it’s a good idea to turn the fan off when no one is in the room to avoid energy waste.

Want to feel warmer once cooler weather sets in? Turn your ceiling fan on. You read that correctly – running a ceiling fan in reverse, that is, clockwise, and at a low speed creates an updraft that pulls cold air up to the ceiling and distributes the warmed air created by your heating system, fireplace, or space heater. The fan blades move the air around so that cold pockets don’t settle at floor level where you’re bound to feel them. Once again, the temperature in the room stays the same, it just feels warmer on your skin.

Operating a ceiling fan correctly can help lower your heating and cooling bills and take some pressure off your HVAC systems. Using a ceiling fan in conjunction with central air during the summer months allows you to raise the thermostat by as much as 4°F without sacrificing comfort. In moderately warm weather, you may not need the AC on at all.

On the flip side, reversing the blade direction during winter and running the fan on low allows you to turn the thermostat down with no reduction in warmth or comfort. In fact, some ceiling fan manufacturers claim that using a ceiling fan properly and consistently during winter can reduce heating bills by as much as 15 percent.

For optimum energy savings, consider the fan’s efficiency rating. Efficiency is determined by how much airflow a ceiling fan creates as compared to the amount of electrical energy it uses. This rating is measured in cubic feet per minute per one watt of electrical power at high speed. The higher the CFM, the more energy efficient the fan. For example, a highly efficient unit will have a CFM of 6,000 or more while an inefficient fan will weigh in at about 75.

Here’s something else to consider. Without keeping your heating and cooling systems in top working order, chances are your energy bills are going to rise, with or without a ceiling fan. So, if it’s been a year or longer since your AC system, furnace or boiler has been cleaned and checked, it’s time to call Air Professionals to get the job done to your complete satisfaction – just like always.